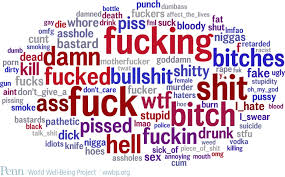 There are two common mistakes which youtube film makers often make and that will cause some viewers to:

That is because the film makers ….

Do some film makers really want to sound like immature third-graders, or why do they constantly use the F-word and other filthy expressions? Quite often I watch youtube films that have an urgent message (since they might convey an alarming conspiracy theory), and one would think that the film maker would therefore do everything in his power to increase the popularity of his film to improve the chances that it will be spread to others. But no! The film maker might still decide to use the F-word here and there which will prevent loads of people from spreading it further. The film maker might respond that he has loads of subscribers and likes, but what is wrong with getting even MORE subscribers and MORE likes? If I knew that preventing certain words would increase the chances for my important film to spread, I would definitely avoid those words. I can only conclude that the film makers feel that their films are not important enough or worth the trouble of avoiding curse words.

The Jews and Israel (the only democracy in the middle east)

The problem is two-fold:

a) Israel is unfairly attacked as a country (sometimes simply for existing) and Israeli politics are also unfairly criticized (maybe they do not like the way Israel protects its citizens from flying rockets and constant terrorist attacks from their Arabic neighbors).

b) The Jews are attacked as a group, and sinister Jewish individuals (who might not even be Jewish more than in the name) are used as representatives of all Jews and of Israel. That goes even if it would be a Jew like Rothschild, who does not regard himself as either a practicing Jew or a lover of Israel but is rather an anti-Jew. Why must a selection of mean-spirited Jews be regarded as the typical Jews of this world and represent the entire community of Jews?

We should of course be allowed to criticize Jews and Israel just like everyone/everything else, but the problem is rather that Jews and Israel are often criticized with another measurement, and unfair generalizations are often made. Jews are often criticized as a group as though they usually work as a unit and have common coffee breaks where they think up various ways to rule the world. There are of course corrupt politicians in Israel as well and Jews who are evil, but why must the whole country and the people as such be judged as a group? Other countries and people are not judged in this way.

Yes, it is very likely that the Israeli intelligence service has been guilty of some dark actions in its history, but the same thing can be said about the intelligence services in the US, Great Britain, France, Italy, Sweden, etc. So why is Israel specifically treated as though it stood out among other countries and constantly demonized? The American CIA has done a lot of bad deeds in its days (and the FBI, and corrupt politicians), but I would not dream of judging all America on the basis of their intelligence service, nor Americans as a group. On top of this, it might only be two percentage of the highest level of CIA who are bad guys with no regard for either America or other countries, and it would simply be wrong to judge America and Americans for something they are innocent of. Not even if we would hypothetically discover that the CIA has started numerous wars in this world and is behind 90% of all false flag operations.

Sometimes I watch youtube films that are excellent because of great support for a certain theory. However, then the film maker might proceed to ruin the film by making attacks on the Jews and/or Israel where he/she neglect to provide support other than saying perhaps “And Israel is behind it because that’s the pattern”, or they might give examples of bad stuff Jews or Israel have done. But are examples really enough? Is it for example possible to prove that Americans are dumber than Canadians by providing examples of dumb Americans? I pray to God you say no.

Israel – a tiny spot in the Middle East

The film makers might make a preposterous claim, such as “Israel is slaughtering Arabs”, but provides no support for this unfair generalization. If they lived in Israel themselves, how would they handle things if they were under constant attacks from their neighbors and risked to die in a rocket attack or a bomb blast in a market? How would they react if they had to deal with Arabic organizations which have on their agenda to erase Israel from the map and the Jews out of existence? How would they react if their neighbors praised terrorists who have killed Jews, and named streets after them? Would they not like a protecting fence, and would they not like a strong Israeli defense? It would be suicide for Israel to lay down their weapons.

Israel has shown in history that they are willing to give up land for peace (Sinai, Gaza, etc). They initially got their tiny land mass (NOT taken from any “Palestinians”) through a UN resolution, and they were not silly enough to say no thanks. They had no country, unlike the Arabs, and Jews had already lived in danger in several countries for many years. Israel immediately offered to share their little spot with the Arabs (despite that the Arabs had huge territories already, including the new Transjordan), but the Arabs started a war as a response. Those Arabs who were wise enough to remain in Israel (they were not forced to leave) became full members of Israel and can share in all the benefits the country provides. There is of course lots more to say, but my point is simply that I have seen SO many great youtube films totally ruined by unfair attacks on Jews/Israel, and the films themselves might have nothing to do with the Middle East anyway. I have seen films about topics such as megaliths (stones) where the lecturer for some reason takes the chance to attack the Jews as a group.