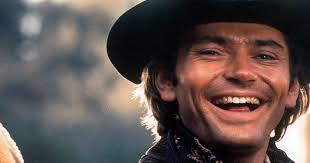 Alias Smith & Jones was a TV series and a western which first aired during the years 1971-1973, and of course later in other parts of the world. The series was indeed popular internationally, also in countries which only had about one or two TV channels at this time, which increased the chances that viewers would find the series – and those who did liked it. Unfortunately the series is also well known for the suicide committed by one of the actors when he was 31 years old, Pete Duel (previously Peter Deuel), early New Year’s eve 1971. He was found naked and dead under the Christmas tree after having shot himself through the ear.

This suicide seems to have been truly spontaneous, where he left no suicide note, no explanation and he had even arranged wake up calls for the following morning in order to get up to work at Universal where he and his colleagues were finalizing a new episode of the show. His parents were travelling by plane in order to make their planned visit the following day. Pete’s girlfriend was, based on her own account, sleeping in the bedroom when Pete turned up to take his gun and said “I’ll see you later”, before the shot was heard moments later.

“But Peter’s most serious personal crisis occurred when he was 16. “My father took great pains to get me ready for college,” he pointed out. “But I had been watching the world and I didn’t see one thing in my future that I really wanted. Everything seemed phony. I was down, terribly depressed. I knew that if I went to college I’d be educated like every other guy who ever went to college. I’d be given little chance to become Peter Deuel. People I didn’t even know, would never even meet, had planned my life for me. I said the devil with it.” / PETER DEUEL: HE KISSES THE GIRLS AND MAKES THEM CRY by Lou LarkinModern Screen, March 1967

“A series disrupts your life and makes you think. You have to do a lot of thinking. The pressures and the time involved in doing a series are the things that can either make you grow or beat you into the mud. I allowed myself to be beaten into the mud last year. I just didn’t really choose to deal with reality.”/ WHAT IS PETE DUEL AFRAID OF ? by Fiona MacDougall ‘TEEN Magazine, February 1972

Peter sometimes felt lonely and depressed also later in his life and sadly too much alcohol became one of his problems He had a couple of DUI’s against him and pleaded guilty to a serious felony drunken driving charge. Two persons almost got killed in the accident and he had unfortunately removed himself from the scene of the accident (something he deeply regretted and couldn’t fathom that he even contemplated). He gave up his driver’s license for a period of time, and he was therefore driven to and from work by his stand-in at the series.

This type of personality change suggests that he was highly unreliable under the influence of alcohol. Moreover, this ordeal together with the fact that he was supposed to stay away from heavy drinking based on the court order, plus the fact that his work wore him out, plus his history of depression should all have motivated him to make precautions and to keep two things away from his house: alcohol and weapons. Unfortunately both were present. What might have happened if at least one of those two things were not present that particular night?

If Pete’s addiction to alcohol was so intense that he couldn’t keep it away from his house (which apparently was the case), then wouldn’t it have been a wise safety measure to at least keep weapons away from the house considering his shaky background and the risk for mood swings during too much drinking? Of course, when you’re sober you might not think that there is a risk of doing anything that foolish when you’re drunk …

Pete had already reached out to Alcoholics Anonymous for help.

It’s hard to know if a small argument with his girlfriend took place that evening, but at least it was established that they had split up a few months earlier and had tried to get back together. It’s quite possible that it still didn’t work out. It’s also possible that a number of factors caused him to drink heavily this evening, and which resulted in his unfortunate decision in the midst of his daze to kill himself.

Unlike his colleague Ben Murphy, Pete didn’t want to be in Alias Smith & Jones in the first place (or any series), but rather in film productions.

Pete was no criminal, and he got his weapon due to the risk of intruders who might try to enter his house. Intruders are still to be preferred over the risk of self inflicted injuries made under the influence of alcohol. A week prior to the death, he had shot a hole in a telegram which he had pinned to the wall and which was telling him he had lost the election to the board of directors of the Screen Actors Guild. (This extra shot is quite significant since the Police wanted to figure out why there were two bullets used in his gun.) Reportedly he shot at the document due to being disappointed at the rejection, and when looking at the result he declared to his friend that the statement of the document was now official thanks to the new period that he had inflicted on the paper.

As a European, I feel that it’s way too easy to get hold of guns in the US. Many spontaneous murders and suicides would have been prevented if people wouldn’t have guns laying around despite that they are neither hunters nor active in gun clubs. If there were more conditions involved for gun ownership (like extensive education about safety procedures, being required to store the weapon in a heavy gun cabinet, being active in a gun club, etc), then these obstacles would eliminate a lot of people from acquiring a gun, and especially criminals. If criminals can’t come by weapons easily, neither will the rest of us feel the need to own guns for protection. Criminals can get hold of guns anyway? Yes, in America! So criminals can never come by guns illegally in Europe? Of course some do, and the homicide rate is not zero in Europe – but the homicide rate in the US is towering compared to the rest of the western world. To me it’s not real freedom to walk around feeling you need to own a gun for protection due to too many criminals owning guns. The day I start to feel that I need a gun in my purse, is the day when I lose my freedom. In order to not head in that direction, I want to continue preventing criminals from owning guns.

Still, if there would be a new American law requiring people to turn in their guns unless they register in an extensive gun safety education class, then of course the criminals would be the last ones to turn in their guns. Maybe it’s too late for America because the guns are already in circulation. If Europe would change the gun laws and make guns more accessible (more like America), the criminals would of course laugh heartily and be the very first ones in line to get guns. THEN (unlike before) the rest of the people would start feeling they need guns for protection. I pray it will never go that way.

Americans might suggest that they want to increase their chances to survive a threatening gun attack by possessing guns themselves which they could use for protection, but my attitude is that it’s the attackers who shouldn’t have guns in the first place. If they don’t have guns, then neither would you need a gun. There are criminals also in Europe who will come by weapons despite serious gun control laws, and those guns are almost exclusively used against other criminals or used in large crimes like a bank robbery. If people would be able to acquire guns more easily, the risk will increase that even criminal teenagers can get hold of them and use them to threaten people on the streets.

If I lived in the US (or if I worked as a farmer in South Africa…), maybe I too would like to own a gun for protection due to the many guns in circulation in the wrong hands, but would an American moving to Europe really want Europe to become just as unsafe as America with the same enormous homicide rate? In America it’s a “leftist” thing to be for strict gun control rules, but I’m definitely not a leftist either by American or Swedish standards.

Let’s suppose you want to change the airline rules by suggesting that weapons should be allowed to bring on board the plane, unless the airline could absolutely guarantee that you will not be threatened or harmed by other passengers with weapons or other threatening tools. It’s hard to guarantee something like this because it has happened, even if rarely, that passengers have used all sorts of things as weapons (if they haven’t been able to smuggle real guns or knives on board). Let’s suppose that the airline will start to accomodate your request and allow weapons on board because “If a passenger is threatened by someone with a weapon, he/she has no way to turn in a plane, so if we allow passengers to carry on board weapons for protection, their chances of surviving a threat will increase!”. Who are you really kidding? Of course the risks will instead increase.

Japan is a country where homicides are rare (they say it’s because it’s illegal ….), and the risk of being shot by a gun is just a tiny percentage. On top of this it’s the same thing there, that criminals with guns aim at other criminals, so if you stay away from being a criminal yourself your chances of encountering a gun aimed against you is indeed very small. Still, what if you managed to change the gun laws in Japan and started to apply American gun laws? Maybe because you feel that you must protect yourself due to the 1% chance of being shot? Criminals will thank you and of course buy guns, but not for protection but in order to aim at you and others. THEN you will start to feel threatened.