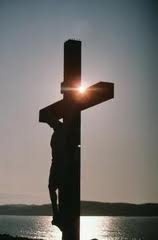 Matthew 27:46 And about the ninth hour Jesus cried with a loud voice, saying, Eli, Eli, lama sabachthani? that is to say, My God, my God, why hast thou forsaken me?

No these ideas derived rather late in our history (we can blame Anselm of Canterbury for most of them even if they were later established by the reformers), and God the Father did NOT abandon Jesus on the cross in any way. Wasn’t the plan and God’s own idea that Jesus would die for mankind? Why then would he abandon his son on the cross when Jesus was nothing but faithful and obedient UNTO DEATH? No, God did not contradict himself by first giving up his son to die for the world, only to cowardly look away when his son needed him the most. The Bible is clear that Jesus was NOT a sinner on the cross in any way, but he was totally clean and undefiled. Jesus was NOT punished by the Father and he did NOT literally bear our sins in his body. (See more in this article.)

Eph. 5:2 And walk in love, as Christ also hath loved us, and hath given himself for us an offering and a sacrifice to God for a sweetsmelling savour.

Hebr. 7: 26 For such an high priest became us, who is holy, harmless, undefiled, separate from sinners, and made higher than the heavens;27 Who needeth not daily, as those high priests, to offer up sacrifice, first for his own sins, and then for the people’s: for this he did once, when he offered up himself.

Acts 2:23 Him, being delivered by the determinate counsel and foreknowledge of God, ye have taken, and by wicked hands have crucified and slain

In Matt. 27:64 it doesn’t say that the Father abandoned Jesus, but Jesus does ask a question in relation to being abandoned, and this question could of course be heard by those who stood near the cross. They could therefore hear yet another prophesy about the Messiah even if they didn’t quite realize it at that moment. There were many prophesies which came true in Jesus Christ and that includes this many faceted question that Jesus shouted out, because it’s a quote from one of King David’s psalms which actually relates to himself (Jesus). The psalm in question is about David’s call for God and his (David’s) initial pondering if his prayers are even heard. Nevertheless, David continues by declaring that God indeed is the one who listens, answers, helps and liberates people when they have a true heart and seek him. The case could be that Jesus’s feelings on the cross were overwhelming and that he shared some of David’s feelings those last horrible moments on the cross when he alone took his last painful breaths. He died for the sins of the world but it must have felt as though the whole world was against him. Jesus is God, but he is also a human being with feelings just like ours. Quoting this psalm was perfect, because it has given us a chance to go back to it and read about both King David and Jesus, and we get many details about what transpired on the cross despite that this psalm was written long before Jesus was even born. Just like King David’s own conclusions, Jesus knew that God DOES listen and answer even in our toughest moments.

Ps. 22:1 My God, my God, why hast thou forsaken me? why art thou so far from helping me, and from the words of my roaring?2 O my God, I cry in the day time, but thou hearest not; and in the night season, and am not silent.—5 They cried unto thee, and were delivered: they trusted in thee, and were NOT confounded.6 But I am a worm, and no man; a reproach of men, and despised of the people.7 All they that see me laugh me to scorn: they shoot out the lip, they shake the head, saying,8 He trusted on the Lord that he would deliver him: let him deliver him, seeing he delighted in him.—11 Be not far from me; for trouble is near; for there is none to help.—14 I am poured out like water, and all my bones are out of joint: my heart is like wax; it is melted in the midst of my bowels.15 My strength is dried up like a potsherd; and my tongue cleaveth to my jaws; and thou hast brought me into the dust of death.16 For dogs have compassed me: the assembly of the wicked have inclosed me: they pierced my hands and my feet.17 I may tell all my bones: they look and stare upon me.18 They part my garments among them, and cast lots upon my vesture.—24 For he hath not despised nor abhorred the affliction of the afflicted; NEITHER HATH HE HID HIS FACE FROM HIM, BUT WHEN HE CRIED UNTO HIM; HE HEARD.

The next psalm is the famous Ps. 23 which starts with “The Lord is my shepherd, I shall not want”. Would a true shepherd really abandon his own sheep and purposely turn his back on it?

Ps. 23:1 The Lord is my shepherd; I shall not want.2 He maketh me to lie down in green pastures: he leadeth me beside the still waters.

Isaiah 49:14 But Zion said, The Lord hath forsaken me, and my Lord hath forgotten me.15 Can a woman forget her sucking child, that she should not have compassion on the son of her womb? yea, they may forget, yet will I not forget thee.